The exhibition debuts a series of works centred around the recurring character of the crab. Beginning as a character in a spiralling unwritten comedy script imagined by the artist, the crab is rendered here as a repeating motif in marquetry wall hangings and an animatronic twitching claw on the gallery floor. We see the crab become both a visual device to be laboriously rendered or manipulated and as unsettlingly disconnected parts of a character within an unexplored story.

The exhibition begins with the character of Crab and his comedy partner Dog. Dog is the name of the housefly. I’d been working for some time on developing a sort of language of symbols or characters to carry through my work. These characters became Crab and Dog.

Crab and Dog exist within a world of other extended symbols and much of the interest for me is in imagining what their world might look like and what objects within that work might be. Lamps, furniture, ornaments, even coat hooks, and then eventually their entire flat – a three sided structure that resembles the set of a sitcom.

While working with these objects I’d also begun to think about (primarily through working on and failing at paintings) some ideas about surface and what surfaces within Crab’s world might look like. I’d thought a lot about greebling (https://en.wikipedia.org/wiki/Greeble) had liked the idea that surfaces from TV and film are always particularly surface or superficial in both the illusion of their construction and the job they do in exposition. And so the four wall hangings in this show become both depictions of the surfaces in the imagined world of Crab and also props from within that world. The four marquetry hangings are ornaments taken from the walls of Crab’s flat – wooden marquetry seems like something with enough craft to be shown in Crab’s domestic setting.

Even the Crab and Dog themselves become motifs to be broken up and repeated. besides being in the marquetry we also find them on the gallery floor and wall as props – out of scale as movie props always are – or perhaps as vignettes of the narrative. Crab’s severed claw twitches as the end of a comedy episode I wrote for them but never quite finished. 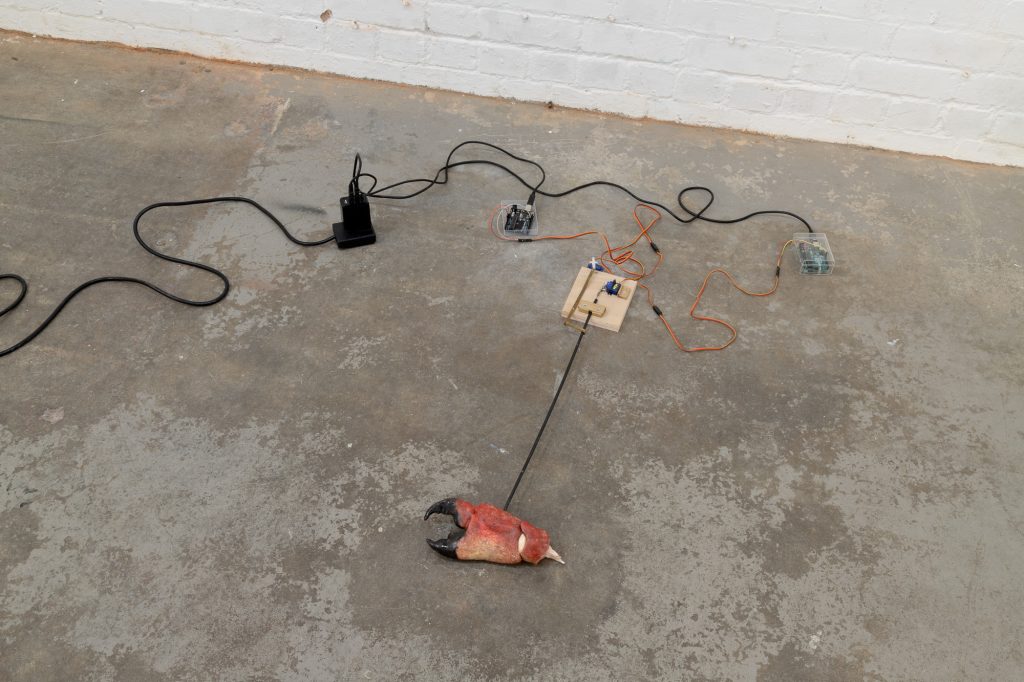 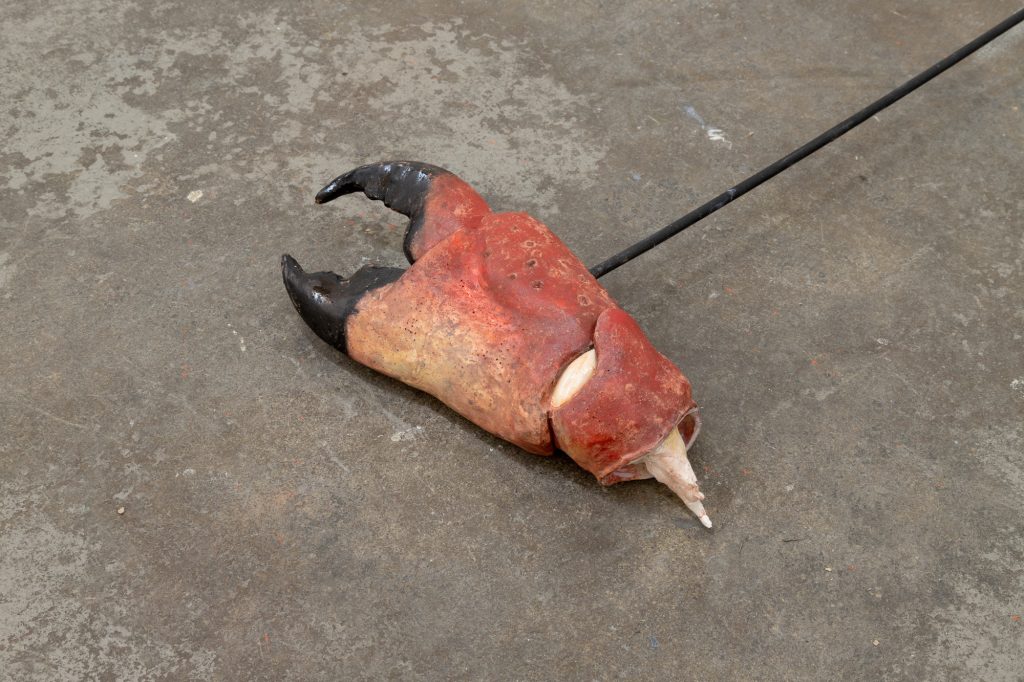 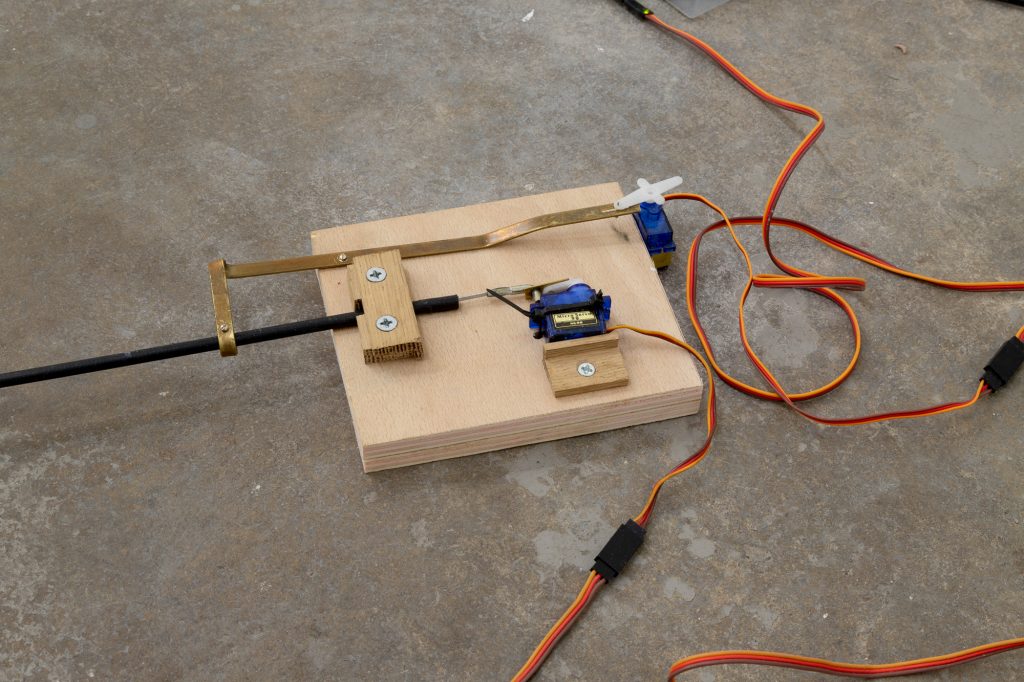 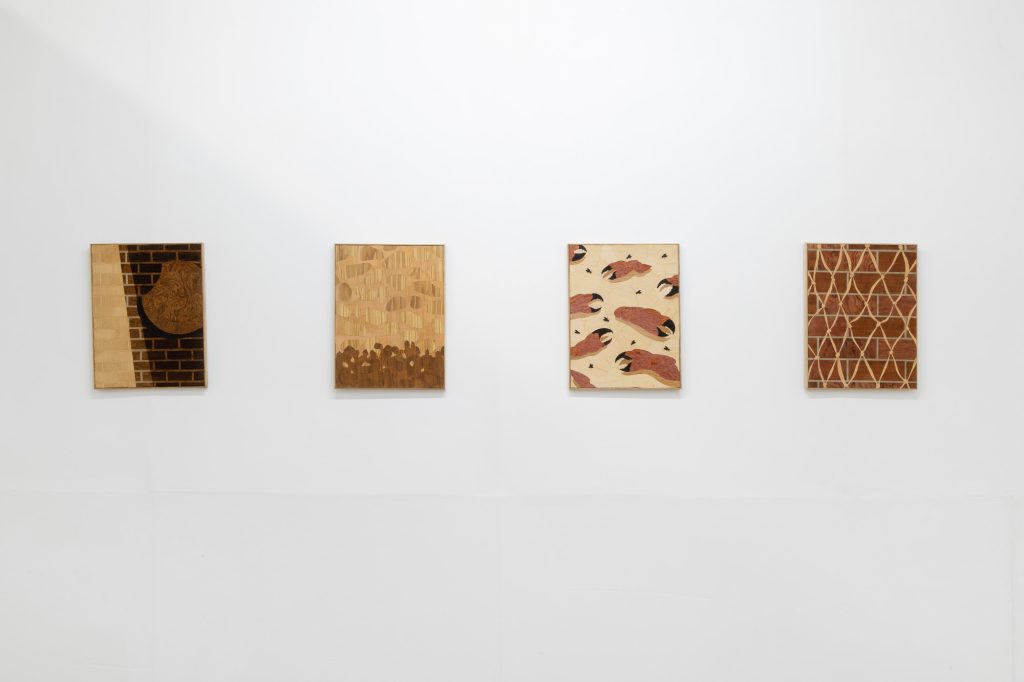 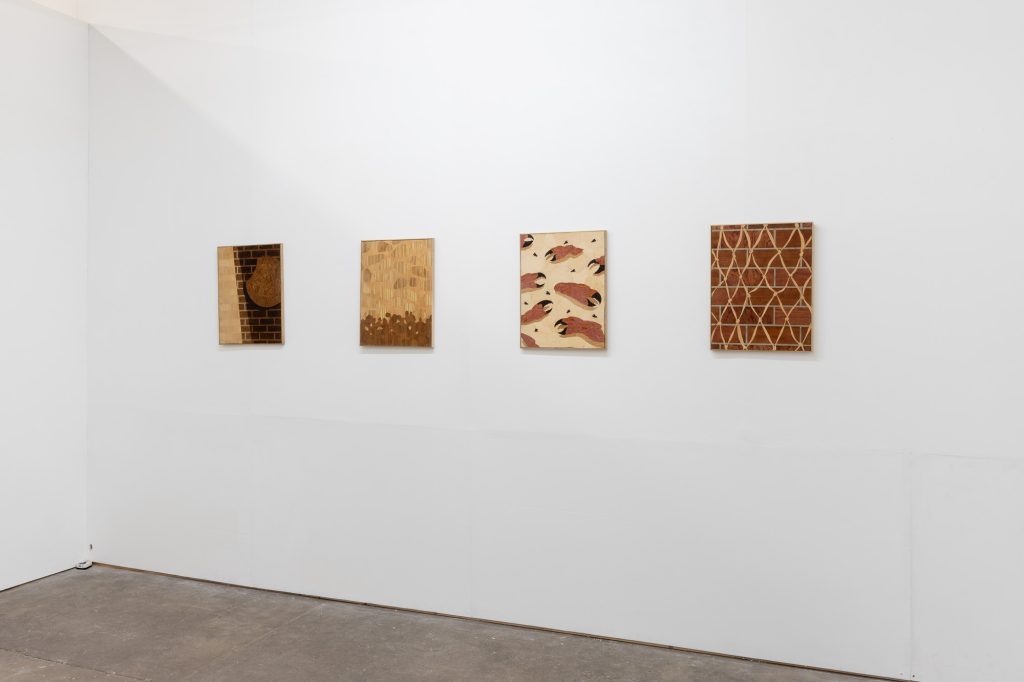 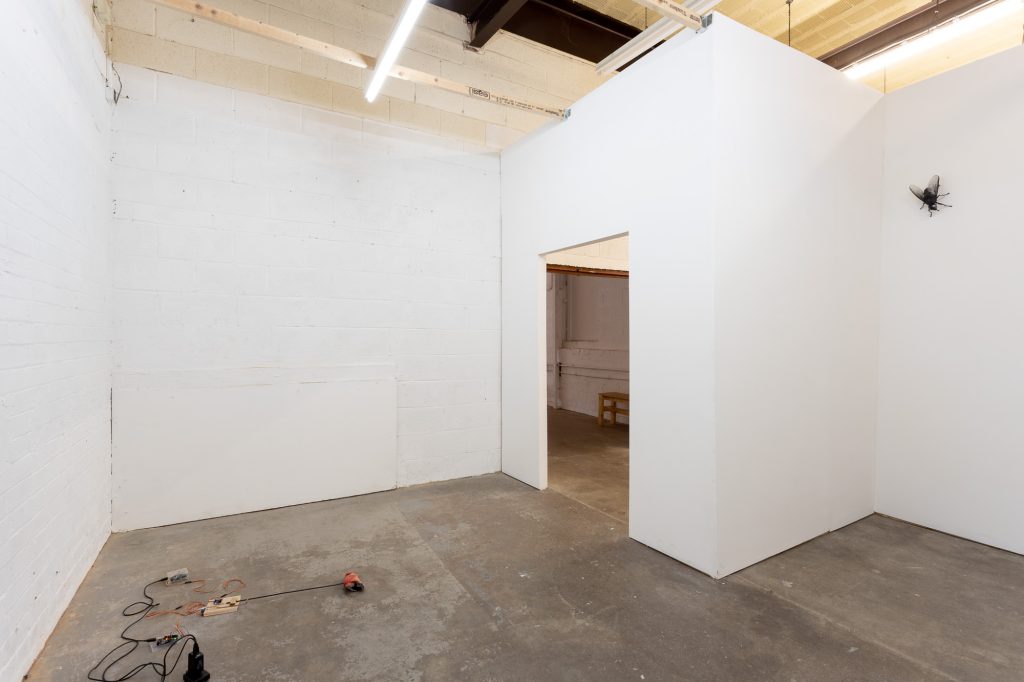 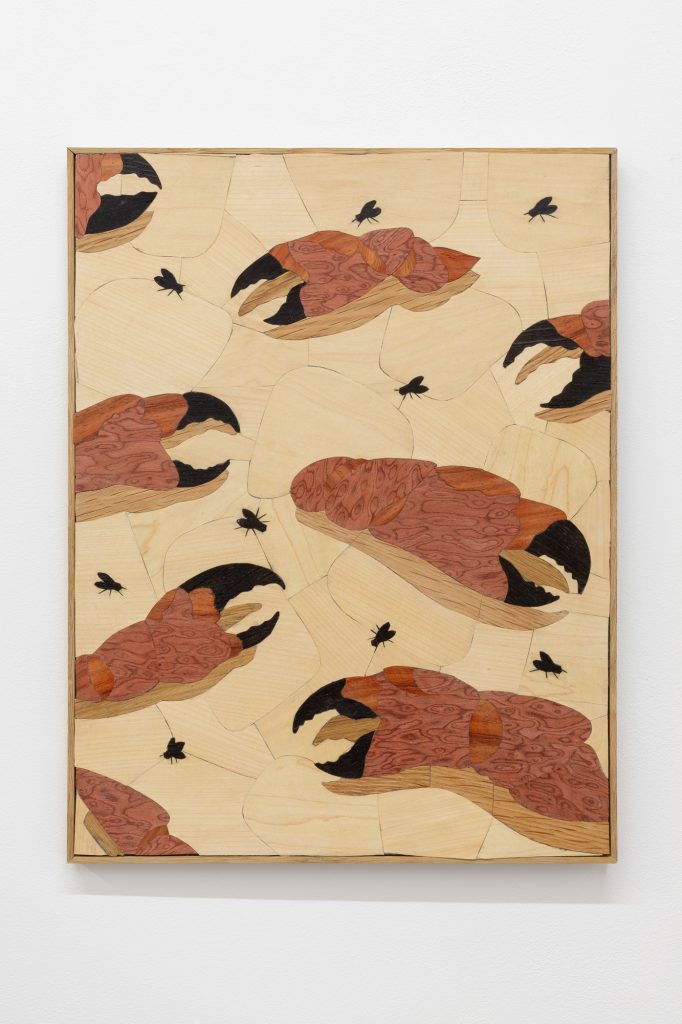 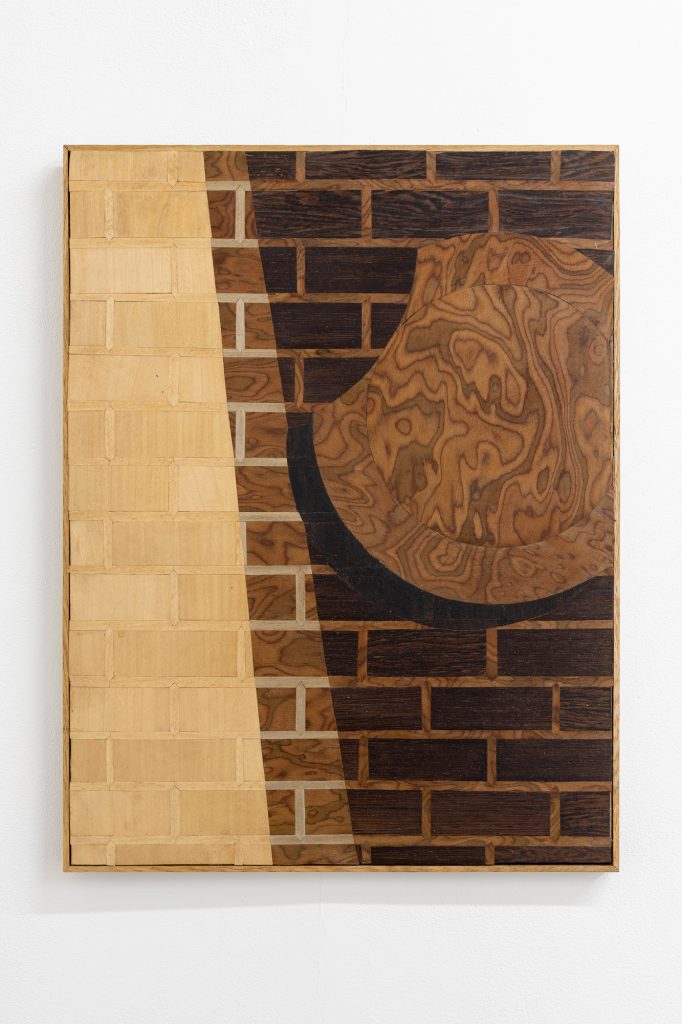 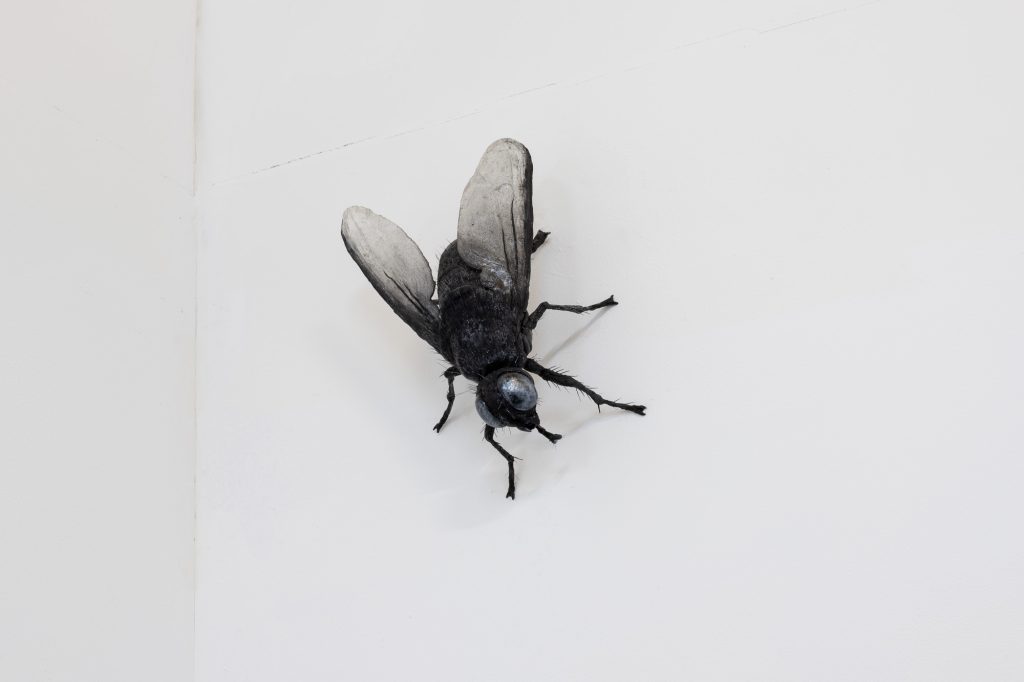